Added 3 days ago by admin
8 Views
Bob Boilen | August 5, 2022
Regina Spektor sat in her hotel room waiting as we tuned the piano behind my desk. In those idle moments, she whipped up a "Tiny Song," and she opens her concert singing this sweet, funny and tiny ditty. "Took a train from New York to D.C. / And everyone was coughing on me," she sings, "But I wore a real tight mask / And got myself a negative COVID test." I won't spoil the rest except to say that what unfolds over the course of the next five songs is the humor and passions I've loved in Regina Spektor's music since receiving an early release of her Soviet Kitsch CD in 2004.

Now 18 years later, Regina has made what I believe is her most astonishing record to date, Home, before and after. We hear two songs from this 2022 release, including the album's opening track, "Becoming All Alone." The story has Regina walking home alone when she hears God call out her name: "And He said, 'Hey, Let's grab a beer / It's awful late / We both right here,' " she sings, "And we didn't even have to pay / 'Cause God is God / And He's revered." Their conversation ensues, and Spektor wonders just why life and loneliness don't improve with time. It's the type of truth and whimsy that makes for such heartbreaking music, including old favorites "Fidelity" and "Samson," performed here simply on piano with charm and conviction. 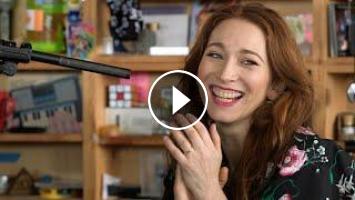 Bob Boilen | August 5, 2022 Regina Spektor sat in her hotel room waiting as we tuned the piano behind my desk. In those idle moments, she whipped up a...