Added 9 months ago by admin
86 Views
The Tiny Desk is working from home for the foreseeable future. Introducing NPR Music's Tiny Desk (home) concerts, bringing you performances from across the country and the world. It's the same spirit — stripped-down sets, an intimate setting — just a different space.

Bobby Carter | Oct. 26, 2021
Decked in a hoodie, cargo pants and coveted sneakers, a slimmed-down and clean-shaven Ed Sheeran stands surrounded by bookshelves and a host of world-class musicians. He’s flanked by music director to the stars, Adam Blackstone, who assembled the band and handled bass guitar duties. After opening this Tiny Desk (home) concert with his latest single, “Shivers,” Sheeran introduces himself and proceeds with more hits, new tunes, and a surprise throwback.

The English singer-songwriter may appear acclimated to a live band, but it’s a pretty rare occasion. For more than a decade, Sheeran’s become revered for ripping down stadiums, but usually (and remarkably) it’s just him, a guitar and loop pedals.

The material released so far from his upcoming album, = (out Oct. 29), leans heavily into the ’80s pop sphere and provides glimpses into Sheeran’s personal life during his time away. Here, he debuts “Overpass Graffiti,” an uptempo ode to the endurance of long love. “Visiting Hours” is a heartfelt dedication to his close friend and mentor, Australian record executive Michael Gudinski, who passed away in March.

Although most of the setlist honors =, Sheeran veers momentarily to take us to church with 2014’s “Make It Rain” from the TV show Sons of Anarchy. The choir only takes up a smidgen of physical real estate, but their voices manage to engulf the entire space, propelling the song to another stratosphere. He closes the performance with a quiet storm version of his summer single “Bad Habits.” 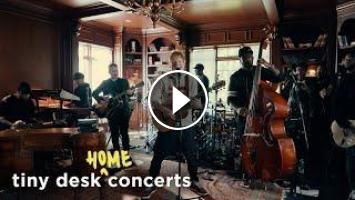