This is a higher quality version of an upload I did earlier, I filmed this super close from section 210 with an amazing view you won't miss a thing! Crystal clear professional audio put in your AirPods!

Ghost and Volbeat took the stage at the Honda Center in Anaheim to wrap up their 2022 U.S. tour along with special guests Twin Temple. Fans arrived early for this one and formed lines around the Honda Center hours ahead of time. As soon as doors opened, many attendees went straight to the merchandise booths to wait in line again for some tour memorabilia.

Not only was tonight the trek’s final outing, but it was also Ghost mastermind and vocalist Tobias Forge’s birthday!

What an amazing show Papa treated the crowd on his birthday and it was amazing don’t miss it!

The anticipation reached a fever pitch as familiar choral music filled the venue, bringing the masses to the floor for another ritual.

The silhouette of a solitary Ghoul was illuminated behind the curtain as Papa Emeritus IV and the band started the set with the song “Kaisarion.”

The curtain dropped and the energy was palpable. The band played a good selection from their catalog with songs like “Rats,” “From The Pinnacle to The Pit,” “Year Zero,” “Mummy Dust,” “Cirice” and “Ritual.” Fans had the good fortune to celebrate Papa Emeritus IV’s birthday with him. During a special moment, the crowd even sang “Happy Birthday.”

Other highlights included “Mary on a Cross,” “Hunter’s Moon,” and a haunting cover of Metallica’s “Enter Sandman.” Unfortunately, all good shows – and tours – must come to an end. Ghost wrapped things up with their chart-topping single “Square Hammer.” It was an incredibly entertaining night of rock and roll.

The European leg of this tour begins next month. Ghost’s new album Impera arrives next week on March 11 via Loma Vista Recordings. Be sure to check www.ghost-official.com for tour dates.

Special thank you to Ghost and Tobias, Papa Emeritus we had a blast thank you! 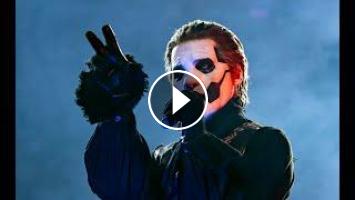 Ghost Live in 4K Full Concert with HD sound - Anaheim CA 2022 This is a higher quality version of an upload I did earlier, I filmed this super close f...