The Rolling Stones did 3 shows in a row in LA. An indoor arena show, this outdoor shows, and a theatre show: https://youtu.be/T3F3tA38GIU

Some highlights:
- Sweet Virginia was only played live 5 times in 2002
- Video recordings are included for Tumbling Dice
- Keith Richards did The Worst and Happy. The Worst was only played live 6 times on this tour!
- Remy Kabaka played drums on Sympathy For The Devil!
- On The B-stage The Rolling Stones did three songs:
• When the Whip Comes Down
• Little Red Rooster (a Willie Dixon cover)
• Like a Rolling Stone (a Bob Dylan cover)
- Sheryl Crow joined on Honky Tonk Women. She did that more often on this tour, but also on earlier tours.
- You Got Me Rocking was the first song of the encore! It was the only time ever played as an encore. When Mick sang "I Was a Pitches", at that exact moment video screen replayed the Anaheim Angles winning the World Series, which happened 6 days before this show. The crowd went crazy.
- The second of the encore and last song of the concert was Satisfaction.

The Rolling Stones played the following 22 songs:
Brown Sugar
It's Only Rock'n Roll (But I Like It)
Start Me Up
Don't Stop
All Down The Line
Sweet Virginia
Angie
You Can't Always Get What You Want
Midnight Rambler
Tumbling Dice
Band Introductions
The Worst
Happy
Sympathy For The Devil (with Remy Kabaka on drum)
walk to b-stage
When The Whip Comes Down (B-stage)
Little Red Rooster (B-stage)
Like A Rolling Stone (B-stage)
Gimme Shelter (including intro/walk to main stage)
Honky Tonk Women (with Sheryl Crow on vocals)
Street Fighting Man
Jumping Jack Flash
You Got Me Rocking (Encore)
(I Can't Get No) Satisfaction (Encore)

The Licks Tour was a worldwide concert tour undertaken by The Rolling Stones during 2002 and 2003. Shows were played in stadiums, Arenas, and Theatres. 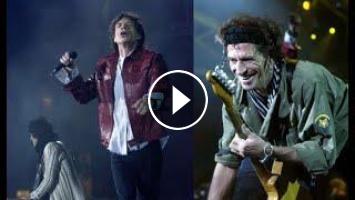